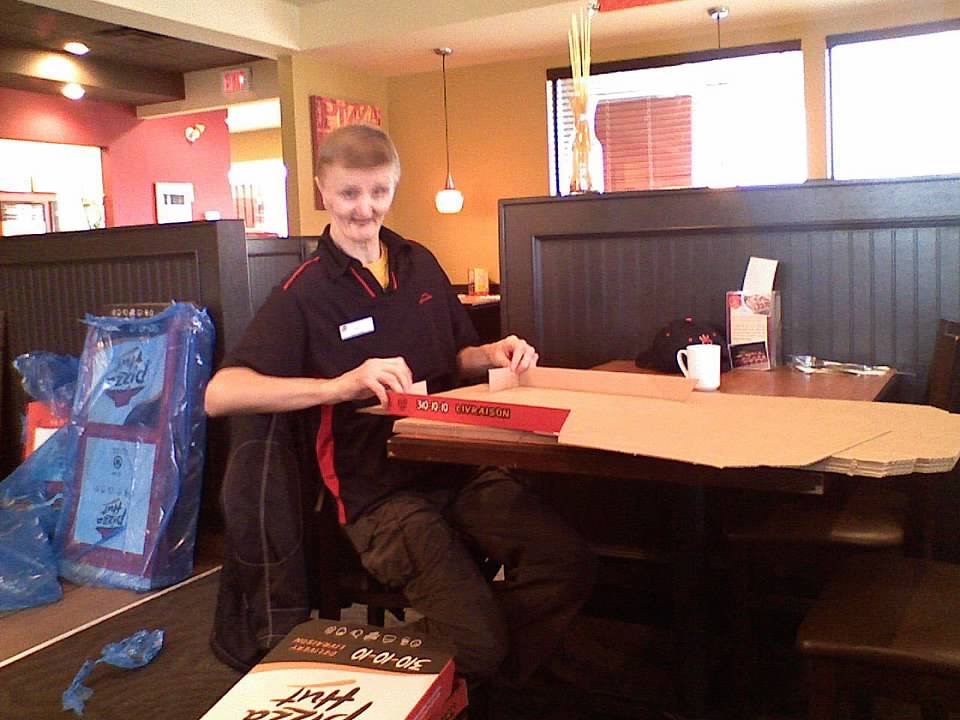 There was this song lyric that always stood out to me as a teenager, which goes, “We mostly work to live, until we live to work.” I remember as a teenager considering that a fate I wanted to avoid at all costs. I did not want to fall prisoner to the mundanity of a dead-end job. However, I never considered other possible interpretations for such a lyric. Perhaps “living to work” is not necessarily about lifelong bondage to clocking in. Rather, it could refer to having a love and passion for one’s work in the purest of forms. Gary displayed this passion in his work throughout his whole time at Pizza Hut. All 28 years of it. 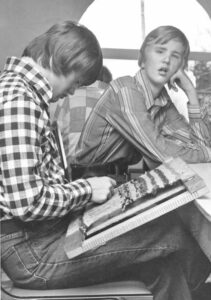 Gary was one of the first people who moved into Bethesda’s Mt. Lehman Home in the late 1970”s. Ann Trudeau, Director of Services, remembers Gary as was one of the first people she met when she started working in the early 80’s. She says, “he was a very mischievous person who loved to tease people, but he got away with it because he was so endearing!” He also loved airplanes and trains and had a train set in his bedroom that ran around his ceiling.

Gary began his time at Pizza Hut in Abbotsford in 1992 as a volunteer and quickly impressed staff with his aptitude for the job. Originally, he folded take-out boxes in exchange for a free pizza lunch. A task that he normally would do in two hours, Gary’s speed became apparent, and he was soon offered a paid position. Dayna Fong, a key worker who often accompanied Gary during his shifts shared, “I often had trouble keeping up with him as he folded boxes quicker than I was able to provide him with new ones.” While Gary certainly enjoyed the money and pizza he earned, it was evident that he cherished the intangible benefits he received from his job.

Gary loved his job and thrived in it. He loved the atmosphere, the people, and his uniform all in addition to the positive ways the job changed him. Lorraine Derksen, the manager at Gary’s home, said she noticed “Gary’s job provided him with increased self-confidence, worth, and pride along with a sense of independence.” According to another one of Gary’s support staff, Imelda Culda, “A side benefit of the job was that it became a cherished activity for Gary do with his Bethesda staff, apart from his housemates.” These benefits likely helped create a greater sense of individuality and ownership since his job was something that made him unique amongst his peers at his home.

Feeling valued and appreciated was very important to Gary. Working at Pizza Hut gave him a sense that he was valued deeply by the managers and staff. It became the space where he could be his best self, in part because of the reciprocal relationship between Gary, and his co-workers and employer at Pizza Hut.

By the time Gary had passed away in 2020, he was easily the longest tenured employee at his Pizza Hut restaurant. He saw a lot of managers and staff come and go. Yet, despite all the changes, each new head manager saw the inherent value in Gary’s presence. “He was practically an institution,” says Dayna. Lorraine further explained, “His longevity helped prove to his many co-workers what he was capable of.”

Gary was also an educator in his time at Pizza Hut. He taught not only what he could do, but also the capability of those with diverse abilities in the workplace. Gary demonstrated the power of inclusive employment.

Gary was well loved by all during his time at Pizza Hut. One manager particularly had a special relationship with him. Salama always made sure to take the extra step to connect with Gary. According to Lorraine, Salama even learned some sign language so that he could communicate with Gary as Gary had hearing and speaking impairments. Salama was the longest tenured manager to work alongside Gary. In 2015, Salama was the recipient of the Diana Buurman award from Bethesda, an award given to those (who are not Bethesda employees) that go above and beyond in their support of people with diverse abilities. After Gary’s passing, Salama honoured him by attending his memorial service. In reflection Salama shared, “Gary was always so happy whenever he arrived at work.” Gary’s genuine warmth evidently made a meaningful impact in his workplace.

As Gary’s health declined last year, the people at Pizza Hut reached out to wish Gary well. Days before he passed, Imelda took him for one final drive to Pizza Hut. Imelda described that, “though weakened, Gary’s excitement strengthened him enough to smile and wave at the building as it came into sight.” Perhaps achieving closure in being able to visit his second home one last time.

This brings me back to the line, “live to work” and the impact Gary’s story has had on my life. Gary lived to work. As Lorraine shared, “Each week he eagerly anticipated when his next shift would be.” Gary’s job was so much more than just a means of income and production. It was a passion and space where he could be the best version of himself. Consequently, Gary was so much more than just an employee at Pizza Hut. He was a comfortable presence who allowed those he interacted with to fully be themselves with him. If this is what work was to Gary, then he truly, “lived to work.”

Through his example, Gary demonstrated that one isn’t simply defined by their productivity. Gary will not only be remembered for the boxes he folded. Rather, his legacy is built upon the relationships he developed. While it is certainly healthy to take pride in the work we do, we must also remember our unconditional, inherent value. Gary knew this deep down and through that, was able to make a positive relational impact while he folded his boxes. He simply made it more than a job.

About the author. Ryan Gaskin is an Employment Specialist that works in Bethesda’s Employment Services. He lives in Abbotsford with his wife, Jessica and has enjoyed being a part of the Bethesda community for over two years. While Ryan did not know Gary personally, Gary and his story left a big impact on him.

Our New Office Building: Shaped by Our Values

Rietta’s story. When moving out becomes a crisis in a time of crisis.